mtsslTrilaterate is a PyMOL plugin for the trilateration of objects based on distance restraints.

The mtsslTrilaterate program calculates the coordinates of an object which is defined by the distances from this object to several "reference" objects. The idea of the program is similar to the Global Positioning System (GPS) that can locate an object on the surface of the Earth by measuring distances to a number of GPS-satellites. Applied to biomolecules, this program can be used to localize paramagnetic metal ions in a biomolecular structure by measuring the distances between these ions and artificially attached spin labels.

The mtsslTrilaterate program is a python code and it works as a plugin for the PyMOL program. It is a part of the mtsslSuite package and is optimized to work in pair with the program mtsslWizard.
The program was tested on the 64-bit Windows 7 platform. Due to some problems with the wx library in PyMOL, the program temporarily does not work on the Mac platform. 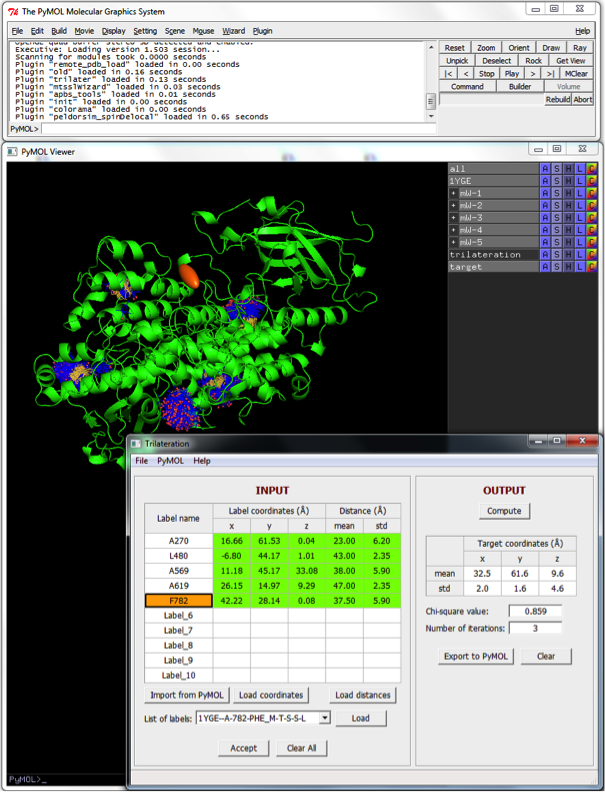 1. The program requires python 2.7 (or higher) to be installed. It can be downloaded free of charge from official web site http://www.python.org/.

2. The program also uses wx and numpy libraries. If the basic version of python does not contain these libraries, they should be installed subsequently (e.g. from http://www.lfd.uci.edu/~gohlke/pythonlibs/). Check if python can recognize these libraries (for this you could run "import wx" and "import numpy" commands in PyMOL: there should be no mistakes).

3. The program requires PyMOL version compatible with python 2.7 (or higher).

4. Save the mtsslTrilaterate.py file somewhere in your computer.

5. Run PyMOL. In the "Plugin menu" select "Plugin Manager". Then open the "Install New Plugin" page and click on "Choose file". Select the mtsslTrilaterate.py file. If installation is finished successfully, a message “Plugin Trilateration has been installed” would appear.

6. Run mtsslTrilaterate from the Plugin menu.

The graphical user interface of mtsslTrilaterate is shown above. It consists of a small menu and a main working window. The main window contains two panels called "INPUT" and "OUTPUT", which display the input and output data of the program, correspondingly.

All input data is introduced into the table of the "INPUT" panel. Each row of this table corresponds to one of the spin labels (reference objects) attached to a biomolecule. The user-defined identifiers of these labels are listed in the first column of the table. The following three columns correspond to the Cartesian coordinates (x, y, z) of the labels in the coordinate frame of a biomolecule. The last two columns represent the mean value and the standard deviation of the distance between each label and a target.

The "OUTPUT" panel displays the calculated coordinates of the target and their standard errors.

In the following the step-by-step instruction of using the program is given:

If you find this program useful, please cite this paper:

It also contains detailed information about the program and examples of its application.

Thanks to Jason Vertrees and Thomas Holder for some programming tips.