This script is an experimental surface cysteine pKa predictor.
The script is solely based on the work by:

Questions to the article should be send to Maik Jacob. 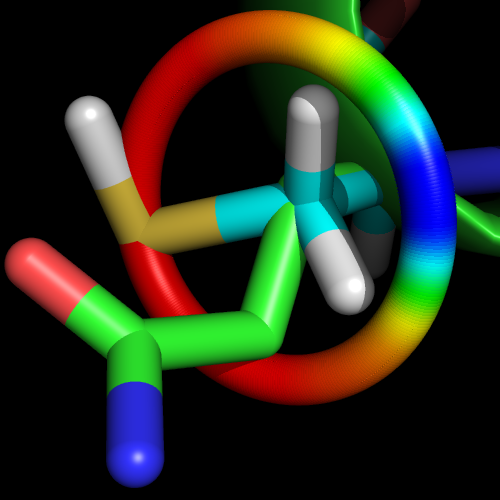 The authors Jacob et al. were able to describe a computational algorithm that could predict the reactivity of surface cysteines. The algorithm was based on reaction rates with Ellmans reagent, Riddles et al., on 26 single cysteine mutants of adenylate kinase. The authors could predict the reactivity of the cysteines with a pearson correlation coefficient of 0.92. The algorithm was based on predicting the pKa values of cysteines by a calculation of electrostatic interactions to the backbone and sidechains of the protein and a energetic solvation effect from the number of atom neighbours. The algorithm is different from other pKa algorithms, since it calculates a Boltzmann energy distribution for the rotational states of cysteine. The reaction rate with Ellman's reagent was set proportional to the fraction of negatively charged cysteines, Bulaj et al.

The authors Ratner et al., used the prediction of cysteine reactivity to selectively label several two cysteine mutants of adenylate kinase. A double mutant was selected with a high and a low reactive cysteine. A dye was first reacted with the most reactive cysteine and purified. Subsequent the second dye was attached to the low reactive cysteine under unfolding conditions. The strategy is interesting since in meet the double challenge of both site-specificity and double labeling of proteins.

The prediction algorithm was tested against a popular, (see Sanchez et al., Sundaramoorthy et al.), web-based pKa prediction program PROPKA. A script was developed to to send a structure from PyMOL to the server and fetch and display the calculated pKa values in PyMOL. The adenylate kinase protein was virtual mutated at the 26 positions described by Jacob et al. and showed a lower pearson correlation coefficient of 0.7. In collaboration with Dr. Maik Jacob, the computational algorithm was developed as a general cysteine prediction algorithm for PyMOL. The script is here published at the pymolwiki, but the phase of validating the algorithm against other experimental pKa values has not been finished. The validation phase was hindered by the limited amount of available cysteine pKa data. For example revealed a search in the "PPD a database of protein ionization constants" only 12 canditates, where several was dimerized and only 2 candidate cysteines were surface exposed.

The algorithm is based on electrostatic calculations, where some parameters have been fine-tuned.
The distance from the sulphur atom (SG) of the cysteine to the nearest backbone amide groups and residues with a partial charge, is considered in the electrostatic model.
The model is including a evalution of Boltzman distribution of the rotation of the SG atom around the CA->CB bond.

Twenty-six mutants of Escherichia coli adenylate kinase (4AKE) were produced, each containing a single cysteine at the protein surface, and the rates of the reaction with Ellman's reagent were measured. The reaction rate was set proportional to the pKa, to fine-tune the parameters in the electro static model.