Difference between revisions of "Cealign"

Note: CEAlign is now built into PyMOL as a native command. See the open-source project page.

This page is the home page of the open-source CEAlign PyMOL plugin. The CE algorithm is a fast and accurate protein structure alignment algorithm, pioneered by Drs. Shindyalov and Bourne (See References).

There are a few changes from the original CE publication (See Notes). The source code is implemented in C (and another in C++) with the rotations finally done by Numpy in Python (or C++ in version 0.9). Because the computationally complex portion of the code is written in C, it's quick. That is, on my machines --- relatively fast 64-bit machines --- I can align two 400+ amino acid structures in about 0.300 s with the C++ implementation.

This plugs into PyMol very easily. See the code and examples for installation and usage.

Why should you use this?

PyMOL's structure alignment algorithm is fast and robust. However, its first step is to perform a sequence alignment of the two selections. Thus, proteins in the twilight zone or those having a low sequence identity, may not align well. Because CE is a structure-based alignment, this is not a problem. Consider the following example. The image at LEFT was the result of CE-aligning two proteins (1C0M chain B to 1BCO). The result is 152 aligned (alpha carbons) residues (not atoms) at 4.96 Angstroms. The image on the RIGHT shows the results from PyMol's align command: an alignment of 221 atoms (not residues) at an RMSD of 15.7 Angstroms.

optAlign is a function within the Cealign package that performs the optimal superposition of two objects of equal length. optAlign follows the Kabsch algorithm which is a closed form, and provably optimal solution to the problem. fit on the other hand uses the Jacobi rotations to iteratively arrive at the solution of optimal superposition. The difference in error between optAilgn and fit seems to be a non-issue (see below) as they both arrive at equivalent solutions for the rotation matrix. The two algorithms are undertake different approaches to orthogonally diagonalizing the correlation matrix.

PyMOL's fit is fast and works well. If you have to use something with a known reference then check out the "optAlign" function from the qkabsch.py file that comes with this Cealign package. If not, you can just use fit and avoid installing new software. :-)

optAlign is slower than fit. I just tested both on a sample NMR ensemble; and, while not an extensive validation of "fit" it shows that (1) fit is faster; and (2) fit gets the same exact RMSD as "optAlign" (when optAlign is told to use all atoms, not just CA). To make optAlign use all atoms and not just the alpha-carbon backbones, comment out (that is, put a "#" at the start of) lines 183 and 184 in qkabsch.py, where it says "CUT HERE."

CEAlign has the semantic, and syntactic formalism of

where a post-condition of the algorithm is that the coordinates of the MASTER protein are unchanged. This allows for easier multi-protein alignments. For example,

will superimpose all the TARGETS onto the MASTER.

Use the alignto command, now provided with cealign. Just type,

to align all your proteins in PyMOL to the one called, PROT.

See Changes for updates. But, overall, the results here are great. 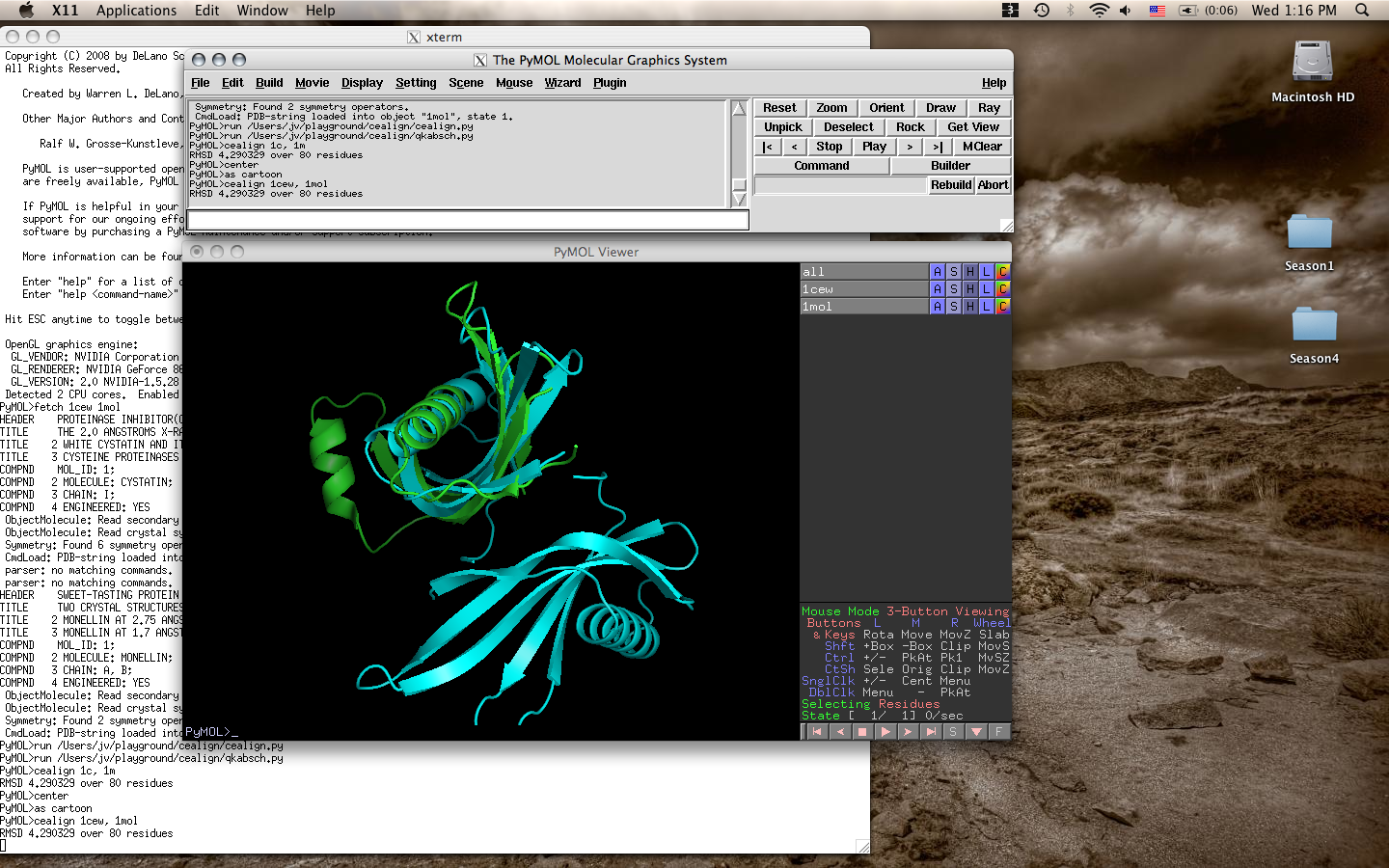 This is a quick and dirty method to use CEAlign 0.8 on Win32 system with the official Pymol builds...

[Note: If this file is corrupt, you may download the latest 'Numpy for Python 2.4' directly from SourceForge.net

Add the science overlay via

and emerge the cealign plugin

For those people that prefer to use the pre-compiled version of PyMOL, here are the basics for your install. This is a poor method of installing Cealign. I suggest users compile and install their own PyMOL. The final goal is to get

If you can do the above three steps, cealign should run from the pre-compiled PyMOL.

In more detail, on a completely fictitious machine --- that is, I created the following commands from a fake machine and I don't expect a copy/paste of this to work anywhere, but the commands should be helpful enough to those who need it:

Please unpack and read the documentation. All comments/questions should be directed to Jason Vertrees (javertre _at_ utmb ...dot... edu).

LATEST IS v0.8-RBS. (Dedicated to Bryan Sutton for allowing me to use his computer for testing.)

Use at your own peril. Please report any problems or inconsistent alignments to this discussion page, or to me directly; my email address all over this page.

v0.8-RBS source updated. Found the bug that had been plaguing 32-bit machines. This should be the last release for a little while.

Also, I provide the option of aligning based solely upon RMSD or upon the better CE-Score. See the References for information on the CE Score.

where the important line is

This problem indicates that your Numpy Unicode is using a different byte-size for unicode characters than is the Python distribution your PyMOL is running from. For example, this can happen if you use the pre-built PyMOL and some other pre-built Numpy package.

Solution: You do not have the linear algebra module installed (or Python can't find it) on your machine. One workaround is to install Scientific Python. (on debian/ubuntu this can be done by: sudo apt-get install python-scipy) Another is to reinstall the Numpy package from source, ensuring that you have the necessary requirements for the linear algebra module (linpack, lapack, fft, etc.).

The Function SimpAlign() is not found

I am running PyMOL v. 0.99rc6 on Win XP Professional x64 edition version 2003 sp2 and have followed the windows install procedure as described above.

Answer: This simply means that PyMOL couldn't find the simplAlign function. To let PyMOL know about this, you must run the following commands before running cealign:

but most people that use cealign would just put these two lines in their .pymolrc file.

If you are trying to align fewer than 16 residues then use align, super, or optAlign. CE uses a window size of 8; and to build a path of more than one window, you need 2*8=16 residues. I will insert some code to re-route small alignments to one of the aforementioned alignment algorithms.

It Worked A Second Ago!

Showing the rewind button to rewind to state 1.

If you were using cealign (or alignto) and now the commands don't work -- that is, they return an RMSD, but don't actually superimpose the objects, then you have a simple problem dealing with states. Most likely the cause of this oddness was (1) when you issued "cealign prot1, prot2" one of them was actually an ensemble of states or (2) you are trying to align to proteins with only one state, but are not looking at state one (because the last protein you were considering had more than one state and you quit editing that protein on a state that's not state 1). To fix this, use the rewind button to get the proteins back into state 1 & reissue the cealign/alignto command.

file is not of required architecture

This error happens on a Mac when you compile one bit of code with gcc-4.0/g++-4.0 and then try to make a library with code compiled from gcc-4.2/g++-4.2. If you recent installed Snow Leopard (Mac OS X 10.6) then this might bother you when you try to install Cealign or even PyMOL. To get around this, ensure that you're building all components with the same gcc/g++ executable. Here's how I did it,

I commented out those lines to stop people from blindly copy/pasting possible harmful lines. Please ensure that your /usr/bin/gcc and /usr/bin/g++ are actually symbolic links, otherwise you could be doing bad things to your computer. In my case, I only relinked gcc and not g++, hence the error.

Text taken from PubMed and formatted for the wiki. The first reference is the most important for this code.

The CEAlign and all its subprograms that I wrote, are released under the open source Free BSD License (BSDL).